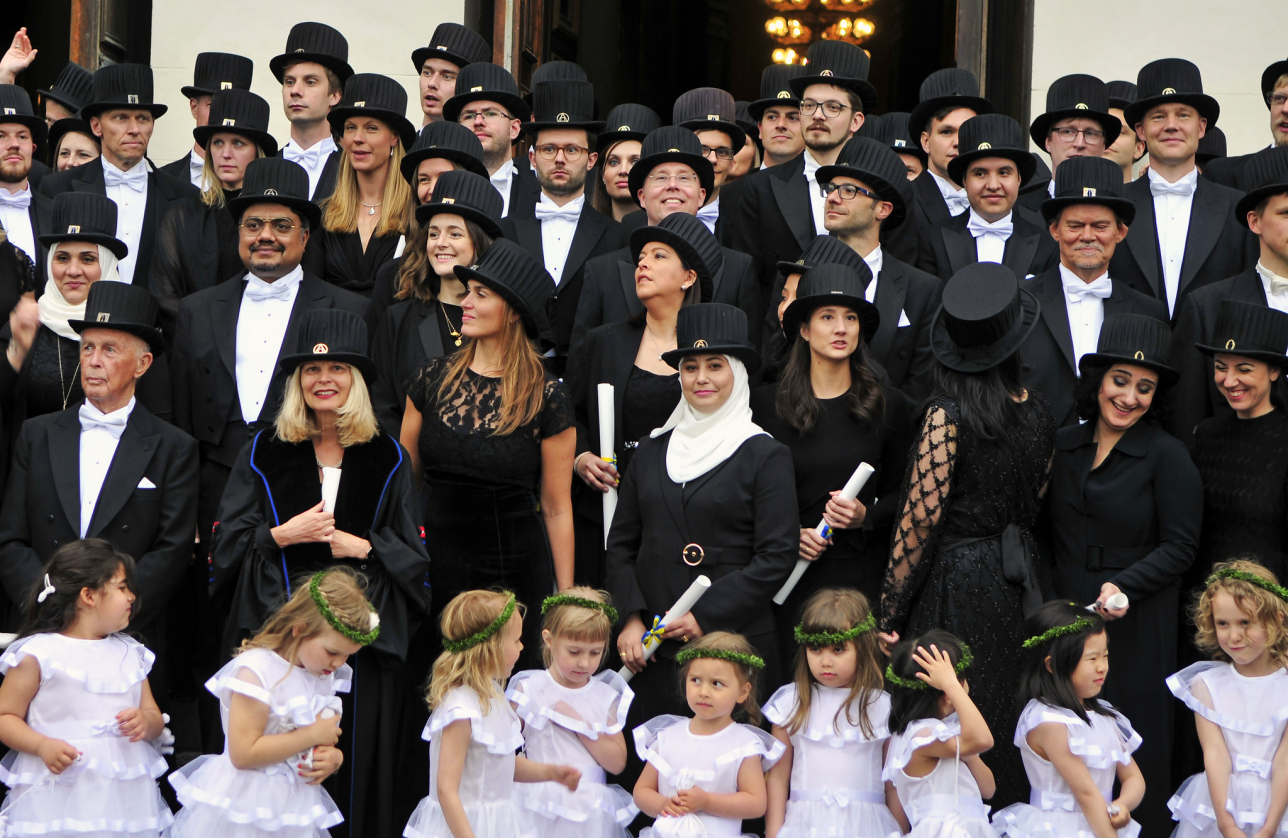 Absens is Latin for absent, and indicates a promovendus being awarded a degree without being present at the actual ceremony, or in absentia. During the ceremony, the person’s name is read out, with the addition of 'absens'.

‘Doktor efter avlagda prov’ (EAP) is the official Swedish denomination for the Latin doctor iuvenis, pl. doctor iuvenes, i.e. new doctoral graduates who have earned their PhD as a result of successfully completing research studies, as opposed to honorary doctors or jubilee doctors.

In the context of the degree conferment ceremony, the faculties are considered on the basis of those that existed in the University’s early days. There were four at the time – Theology, Law, Medicine and Philosophy. The original Faculty of Philosophy, corresponding to today’s Faculties of Humanities, Social Sciences, Science and the School of Economics and Management, still mark their affinity by sharing a presenter. There are now nine faculties at Lund University, since the addition of the Faculty of Engineering and the Faculty of Fine and Performing Arts.

The title of honorary doctor, doctor honoris causa in Latin, is a distinction which is awarded by a faculty. The honorary doctors are people who have achieved something of major importance for the University or for society, whom the faculty wishes to recognise and tie to its research community. Although often academics from other universities, honorary doctors can equally well be from outside academia. Every year, around 20 honorary doctorates are awarded by Lund University. 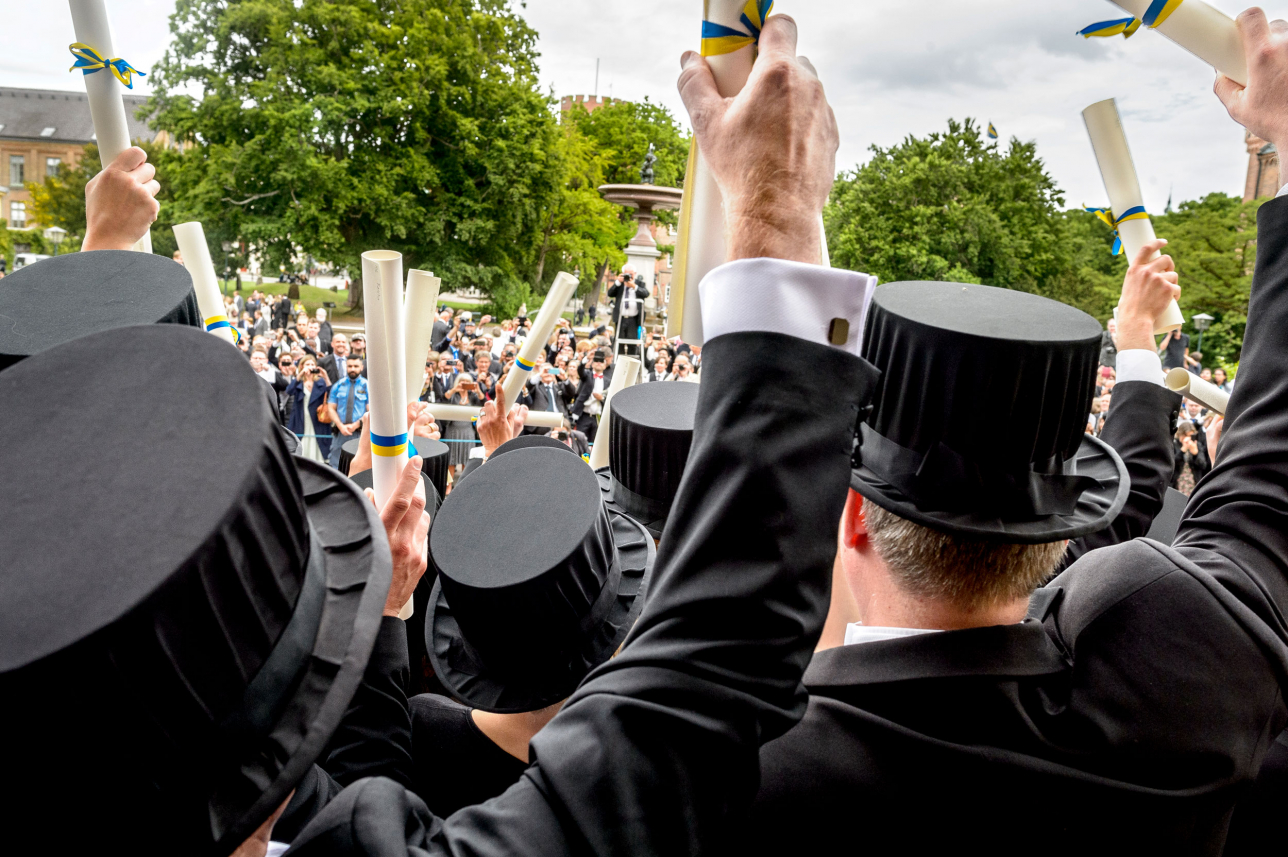 The doctoral degree conferment ceremony involves the hat, the laurel wreath, the ring and the diploma. These insignia are bestowed upon the graduands during the ceremony.

The doctor’s hat symbolises freedom and power. It is covered with black, pleated fabric. The theology hat features a black bow, while the other faculties’ hats have a gold buckle at the front specific to the relevant faculty.

The laurel wreath was a symbol of scientific, literary and athletic merit in the ancient world. The custom of crowning doctoral graduates with a laurel wreath occurs only in Sweden and Finland.

The ring is made of gold and symbolises loyalty to science. The ring is handed out to all new doctoral graduates and to the honorary doctors. The rings are marked with a symbol specific to the relevant faculty.

The diploma was at the outset a written confirmation of the rights awarded to doctoral graduates. The diplomas distributed to the graduands in the cathedral are in Latin and carry the University seal. Previously, the diplomas were handed out by a young boy representing the god Apollo. As the graduands became more numerous, the task became overwhelming for a five-year-old so a ceremonial officer took over.

Jubilee doctor, or doctor jubilaris in Latin, is a title bestowed upon doctors who earned their PhD degrees at Lund University fifty years previously. During the doctoral degree conferment ceremony, they are handed a new diploma and those affiliated with one of the faculties historically included in the Faculty of Philosophy receive a new wreath. 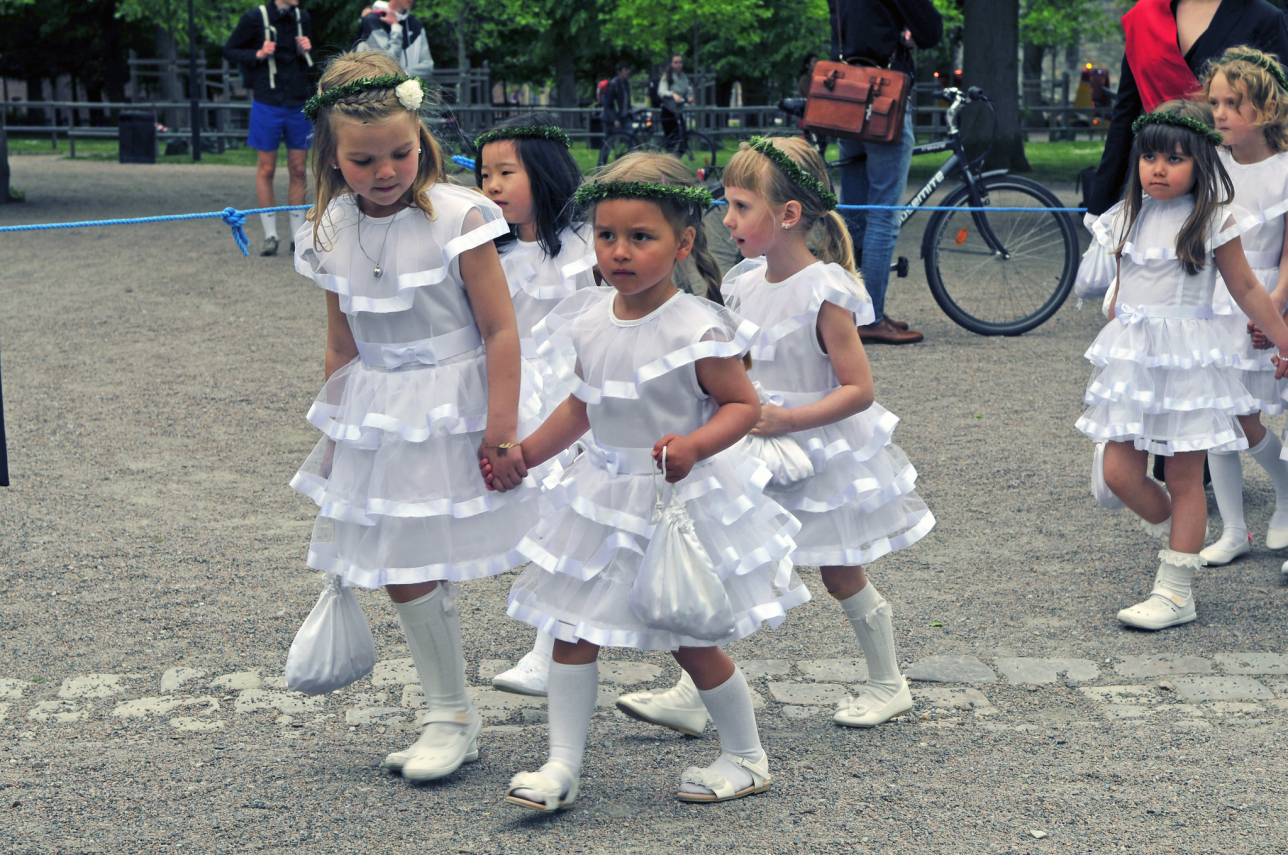 The wreath-bearers are young girls who make an entrance during the second half of the doctoral conferment ceremony, carrying the wreaths which will be bestowed upon the doctors from the historic Faculty of Philosophy, i.e. today’s faculties of Humanities, Social Sciences, Science and the School of Economics and Management. The wreath-bearers symbolise the nine muses, who inspired thinkers and artists to great works in antiquity. The wreath-bearers are the daughters of some of the new doctoral graduands at the faculties historically included in the Faculty of Philosophy. 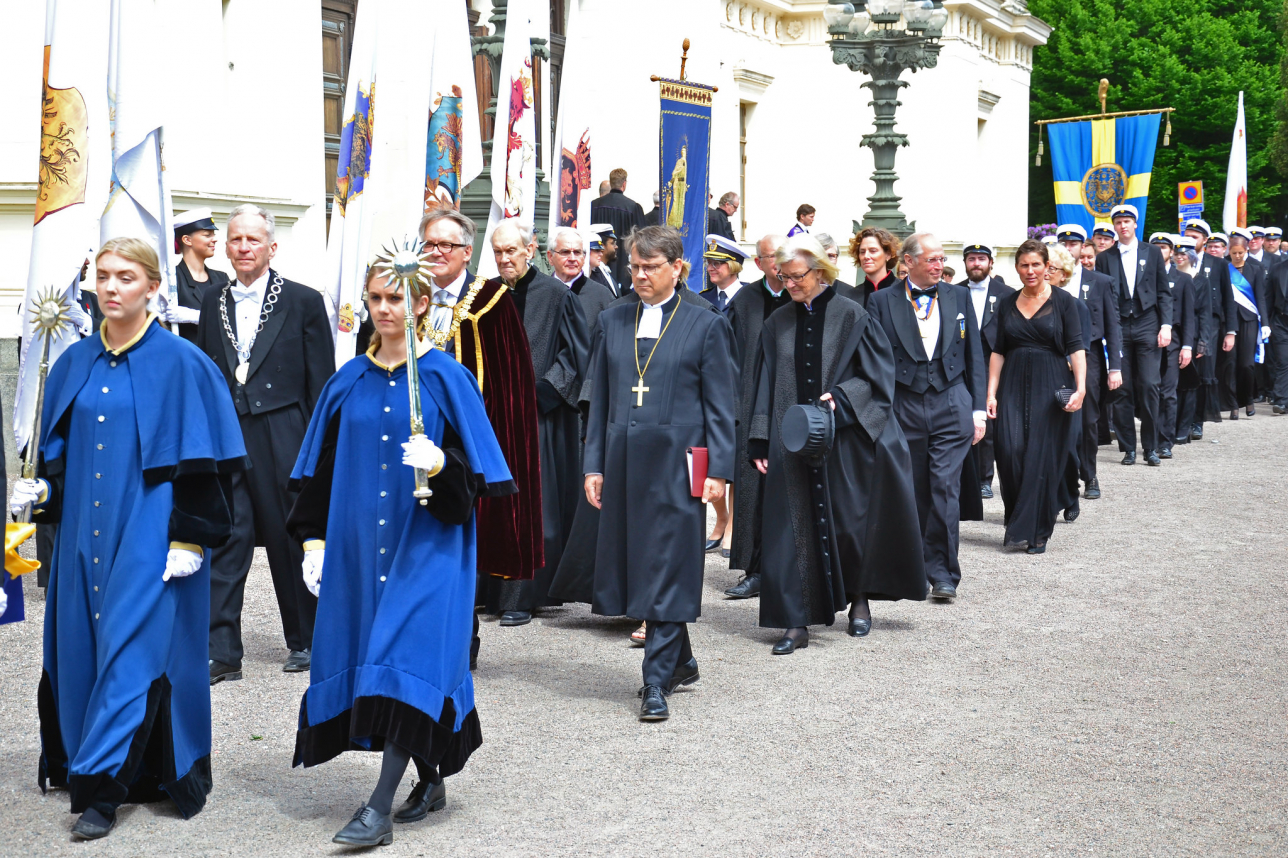 The proctors are the two people dressed in blue who precede the vice-chancellor in the procession and sit in front of the podium during the ceremony. The proctors are the vice-chancellor’s honorary guards and each carry a sceptre which was given to the University at its inauguration in 1668. The sceptres bear inscriptions in Latin, Sapientia humana and Sapientia divina respectively, meaning human and divine knowledge.

Latin is the language used throughout the doctoral degree conferment ceremony; even the first names of the graduands are latinised during the ceremony and as they appear on the diploma. 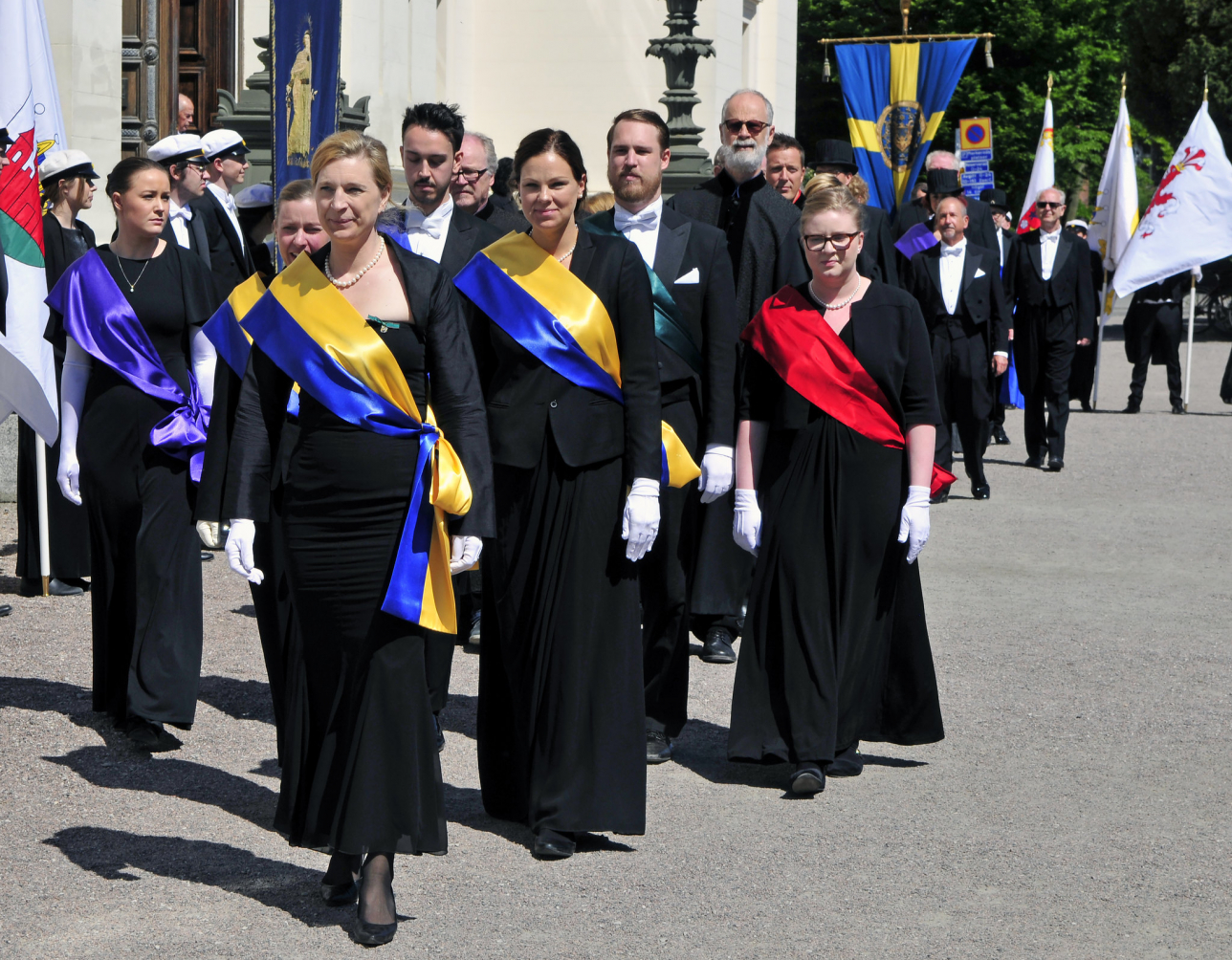 In the context of the doctoral degree conferment ceremony, the podium in the cathedral is referred to as Parnassus and symbolises Mount Parnassus, seat of the ancient Greek gods. During the ceremony, the graduand is lead over Parnassus by the presenter, in a ritual representing the graduand’s right to join the ranks of academic teachers from that moment forward. The procession starts from the main university building, at precisely 12:00, passing through Lundagård park and into the cathedral. The procession is led by the University’s head of ceremonies and events, followed by the presenters/faculty representatives, and each faculty with its jubilee doctors, honorary doctors and new doctoral graduands in the following order: Theology, Law, Medicine, Engineering, Fine and Performing Arts, Humanities, Social Sciences, Economics and Management, and Science. They are followed by the vice-chancellor, the university management and dignitaries (honoratiores). Closing the procession are the faculty lecturers and PhD-holding guests (hospites). The procession is escorted by marshals. Standard-bearers for the students and the student nations also take part in the procession.

Promovendus/a is the graduand, i.e. the person who is to receive a doctoral degree, pl. promovendi. Promotus/a refers to a doctoral graduate, pl. promoti. 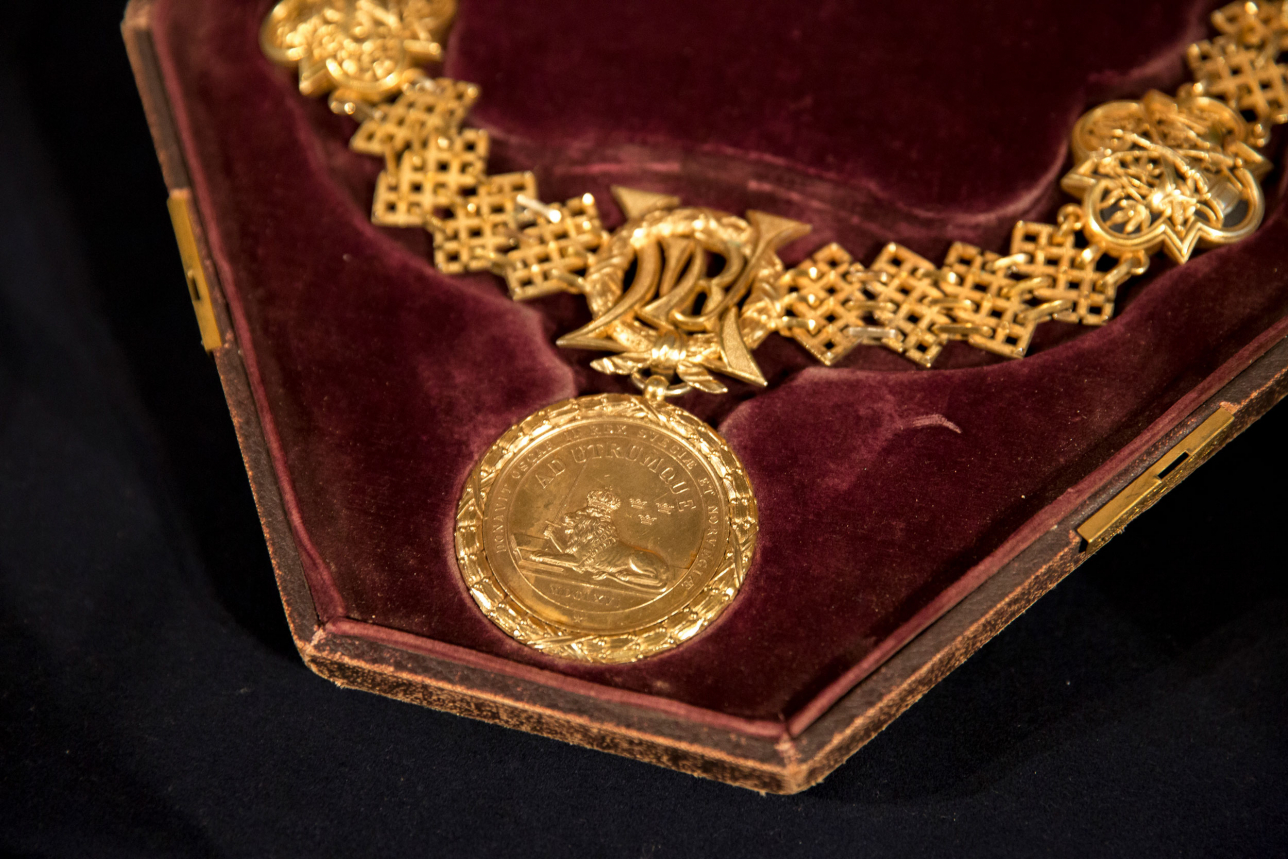 The vice-chancellor’s chain was a gift to the University from King Oscar II in 1882, on the occasion of the inauguration of the main university building. The same sovereign had also given a chain to Uppsala University five years previously (for its 400th anniversary in 1877), so similar in design and symbolism to the Lund one that the two are considered to be siblings. Both chains were probably also created by the same designer (architect Fredrik Wilhelm Scholander) and goldsmith (C F Carlman). The medallions hanging from the chain were however created by different engravers, A Lindberg in the case of Uppsala and Lea Ahlborn for Lund. On both chains, the symbols of the four original faculties have been incorporated between the links. As mentioned above, a medallion hangs on each chain. In both cases, this medallion depicts Oscar II himself on one side. The other side is different: the Lund medallion features the University seal whereas Uppsala’s depicts an enthroned Minerva (surrounded by many other symbolic animals and objects). In Uppsala the medallion is worn with the king’s portrait showing, and older sources and images show that this was the case in Lund as well. At some point in more recent times, the medallion on the Lund chain has clearly been remounted so as to display the University seal instead.

The gowns are the black robes worn by the presenters, the deans and the professors during the degree conferment and at other academic ceremonial events. The lapels of the gowns are decorated with braiding in the relevant faculty’s colours.

The Chief of Protocol is in charge of the University’s ceremonies office which has the ultimate responsibility for all academic ceremonial events at Lund University, including the doctoral degree conferment ceremony. The ceremonies office plans, administrates and implements both the ceremony in the cathedral and the formal dinner that follows in the evening.