If silence is golden, speech is silver – and singing the worst.
Singing doesn’t need to be silenced, however, but at the moment the wisest thing is to sing with social distancing in place. The advice comes from aerosol researchers at Lund University in Sweden. They have studied the amount of particles we actually emit when we sing – and by extension – if we contribute to the increased spread of Covid-19 by singing.

“There are many reports about the spreading of Covid-19 in connection with choirs singing. Therefore, different restrictions have been introduced all over the world to make singing safer. So far, however, there has been no scientific investigation of the amount of aerosol particles and larger droplets that we actually exhale when we sing”, says Jakob Löndahl, associate professor of Aerosol Technology at Lund University.

Aerosols are small airborne particles. To get a better understanding of the amount of aerosols and virus particles we actually emit when we sing, 12 healthy singers and two people with confirmed Covid-19 took part in a research project. Seven of the participants were professional opera singers.

The study shows that singing – particularly loud and consonant-rich singing – spreads a lot of aerosol particles and droplets into the surrounding air.

Droplets are spread in the air when we sing – here from powerful and consonant-rich singing photographed with a high-speed camera. (The film is silent.) Photo: Alexios Matamis

“Some droplets are so large that they only move a few decimetres from the mouth before they fall, whereas others are smaller and may continue to hover for minutes. In particular, the enunciation of consonants releases very large droplets and the letters B and P stand out as the biggest aerosol spreaders”, says Malin Alsved, doctoral student of Aerosol Technology at Lund University.

During the research experiments at Lund University’s Aerosol Laboratory, the singers had to wear clean air suits and enter a specially built chamber supplied with filtered, particle-free air. In the chamber, analysis was conducted of the number and mass of particles emitted by singers during breathing, talking, different types of singing and singing with a face mask.

What they sang was a short and plosive-rich Swedish song, “Bibbis pippi Petter”, which was repeated 12 times in two minutes at constant pitch. The same song was also repeated with the consonants removed, leaving only the vowels. During the song tests, aerosols and larger droplets were measured using strong lamps, a high-speed camera and an instrument that can measure very small particles. The louder and more powerful the song, the greater the concentration of aerosols and droplets.

“We also carried out measurements of virus in the air close to two people who sang when they had Covid-19. Their air samples contained no detectable amount of virus, but the viral load can vary in different parts of the airways and between different people. Accordingly, aerosols from a person with Covid-19 may still entail a risk of infection when singing”, says Malin Alsved. 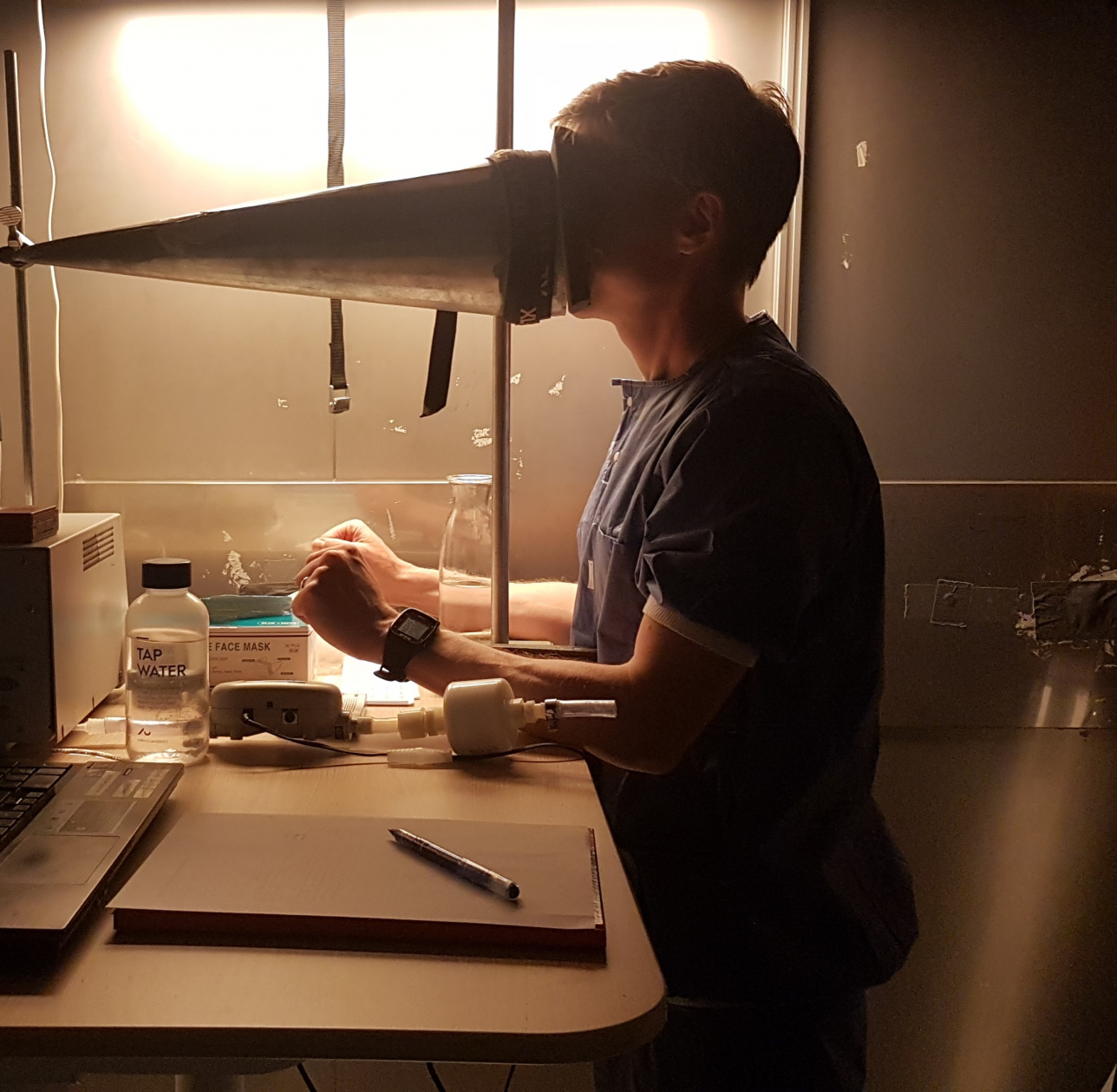 During the tests, the singers sang into a funnel. The arosol particles were measured at the other end of the funnel. Photo: Malin Alsved

Can we still have choral singing, singalongs during concerts, chanting at sporting events and loud talk in bars? The researchers consider that if we have a good understanding of the risks involved when a group of people sing together, we can also sing in a safer way. The song can be sung with social distancing, good hygiene and good ventilation, which reduces the concentration of aerosol particles in the air. Face masks can also make a difference.

“When the singers were wearing a simple face mask this caught most of the aerosols and droplets and the levels were comparable with ordinary speech”, says Jakob Löndahl.

“Singing does not need to be silenced, but presently it should be done with appropriate measures to reduce the risk of spreading infection”, says Jakob Löndahl.

Publication in Aerosol Science and Technology: Exhaled respiratory particles during singing and talking

Latest news
Link to rss
14 Jan 2021
Prestigious ERC grants for new Covid test and spectrometer
Christelle Prinz, professor of solid state physics, and Edouard Berrocal, researcher in combustion physics, will each receive EUR 150 000 to further develop research results…
12 Jan 2021
Astronomers find explanation for mysterious stars
Researchers from Lund University in Sweden have now drawn an exciting conclusion regarding massive stars that can be observed in the outskirts of many spiral galaxies. These…
26 Dec 2020
Model used to evaluate lockdowns was flawed
In a recent study, researchers from Imperial College London developed a model to assess the effect of different measures used to curb the spread of the coronavirus. However, the…
18 Dec 2020
Three in a row – hat trick for brain electrodes
In order to study how the brain functions and to develop new technologies for treating neurological diseases, researchers at Lund University in Sweden have developed tissue-…
16 Dec 2020
WATCH: 85% of cough droplets blocked by surgical mask, experiment shows
Researchers at Lund University in Sweden have recorded coughs resolved at high temporal resolution - 8,000 images per second - and high detection sensitivity, using laser light…
All news
Share
Share on facebook Share on twitter Share on linkedin
Categories
News related to the coronavirus (Covid-19)
Page manager: lotte [dot] billing [at] er [dot] lu [dot] se | 4 Dec 2020

There are many questions concerning the coronavirus and infection prevention that need to be answered as soon as possible. One of the key questions is: Is the coronavirus floating around in the air we breathe? In a few weeks, air samples from coronavirus patient rooms will hopefully have been analys...
More news