Today, in a ceremony at the Ministry for Foreign Affairs, a Lund University Master’s student has been named a ‘Global Swede’ by the Swedish Minister for Trade. 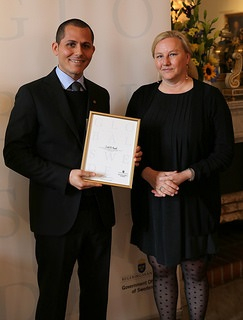 The distinction ’Global Swede’ is awarded to international students who are considered ‘good ambassadors for their University and for Sweden’, and have shown ’academic creativity, entrepreneurship or innovation’. This year, Ziad El-Awad from Jordan has received the honour of representing Lund university.

Ziad has studied Business and Management in USA, Great Britain and Lebanon – and now Sweden. This spring, he will receive his Master’s Degree in Entrepreneurship (New Venture Creation Track) at Lund University School of Economics and Management.

Ziad is a cofounder of a food export business, which has given him firsthand experience into food and commodity trade. The choice to study entrepreneurship in Sweden was not a coincidence.

”I chose to join the programme to get insights on how business is conducted in Sweden, and I aspire to continue with my current food business, taking bigger steps in establishing a new line of organic products for the Middle East and the Gulf region”, Ziad says about his future plans.

”Nothing is more exhilarating than taking an idea and building a business out of it”, he adds.

About: Global Swede is a partnership between the Swedish Ministry for Foreign Affairs and the Swedish Institute. The initiative is a complement to the project ‘Kosmopolit’, which highlights the skills of foreign-born entrepreneurs in order to promote international trade, job creation and economic growth.

Latest news
Link to rss
18 Sep 2020
LU researcher receives Ig Nobel prize for alligator helium study
Stephan Reber has been awarded an Ig Nobel Prize for Acoustics - for a 2015 study that involved an alligator inhaling helium. This was done to understand if crocodilians have…
17 Sep 2020
Metformin for type 2 diabetes patients or not? Researchers now have the answer
Metformin is the first-line drug that can lower blood sugar levels in type 2 diabetes patients. One third of patients do not respond to metformin treatment and 5 per cent…
15 Sep 2020
Rare pattern observed in migrating common swifts
Compared with other migratory birds, the common swift follows a very unusual pattern when it migrates from the breeding areas in Europe to its wintering locations south of the…
15 Sep 2020
Lund University receives donation for Medical Humanities
A donation of SEK 76 million from Birgit Rausing will enable Lund University’s Faculty of Medicine to establish the humanities as an integrated part of medical training and…
7 Sep 2020
Could singing spread Covid-19?
If silence is golden, speech is silver – and singing the worst.
Singing doesn’t need to be silenced, however, but at the moment the wisest thing is to sing with social…
All news
Share
Share on facebook Share on twitter Share on linkedin
Page manager: lotte [dot] billing [at] er [dot] lu [dot] se | 15 Sep 2020