Researchers already know that gelatin-covered electrode implants cause less damage to brain tissue than electrodes with no gelatin coating. Researchers at the Neuronano Research Centre (NRC) at Lund University in Sweden have now shown that microglia, the brain’s cleansing cells, and the enzymes that the cells use in the cleaning process, change in the presence of gelatin.

“Knowledge about the beneficial effects of gelatin could be significant for brain surgery, but also in the development of brain implants”, say the researchers behind the study.

Our brains are surrounded by a blood brain barrier which protects the brain from harmful substances that could enter it via the bloodstream. When the barrier is penetrated, as in the case of biopsy or brain surgery for example, leaks can occur and cause serious inflammation. Researchers at the NRC have previously shown that gelatin accelerates brain tissue healing and reduces damage to nerve cells in the case of electrode implants, but only now are they starting to understand how.

The researchers used sedated rats to investigate how the brain is repaired after an injury. Gelatin-coated needles were used in one group, and needles without gelatin in the other.

“The use of gelatin-coated needles reduced or eliminated the leakage of molecules (which normally don’t get through) through the blood brain barrier within twenty-four hours. Without gelatin, the leakage continued for up to three days”, says Lucas Kumosa, one of the researchers behind the study, which was recently published in the research journal Acta Biomaterialia. 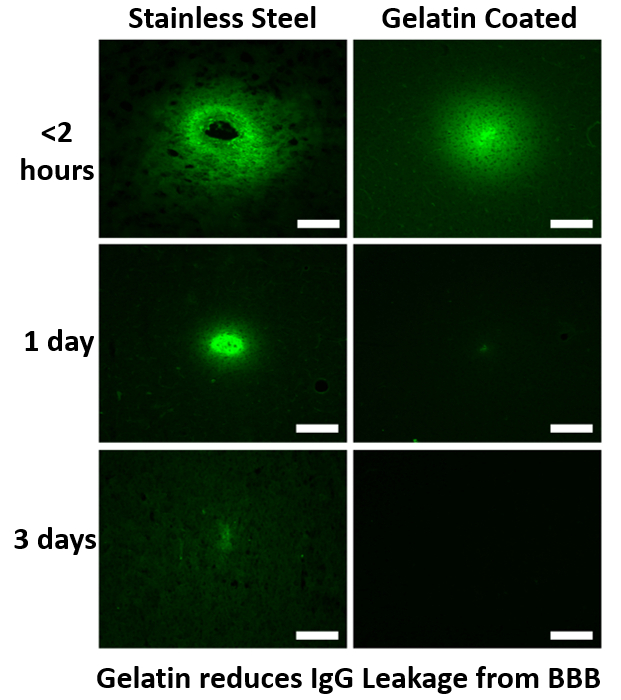 The images in the left-hand column show the healing of an injury caused by a stainless steel needle. The images in the right-hand column show what the process looked like when the researchers used a gelatin-coated needle. Gelatin accelerated the healing process and reduced the leakage of blood-borne molecules capable of passing through the blood brain barrier into the brain and causing inflammation.

When there is an injury to the brain, microglial cells – the brain’s cleaning cells – gather at the site. They clean up, but can also damage the nerve cell tissue through enzymes they release. In their study, the researchers observed a change in which cleaning cells moved towards the injury site.

“When we used gelatin, we saw only a small number of the inflammatory microglial cells. Instead, we observed cells of a different kind, that are anti-inflammatory, which we believe could be significant in accelerating healing”, explains Lucas Kumosa.

The hypothesis is that the potentially damaging enzymes are occupied with the gelatin instead.

“Gelatin is a protein and its decomposition releases amino-acids that we believe could promote the reconstruction of blood vessels and tissue”, explains Jens Schouenborg, professor of neurophysiology at Lund University.

Research is currently underway on how electrodes implanted in the brain could be used in the treatment of various diseases, such as epilepsy or Parkinson’s. A major challenge has been to find ways of reducing damage to the area when using such implants.

“Although the research field of brain electrodes is promising, it has been a challenge to find solutions that don’t damage the brain tissue. Knowledge of how injuries heal faster with gelatin could therefore be significant for the development of surgical treatment as well,” says Jens Schouenborg.

The research is funded by the Knut and Alice Wallenberg Foundation, the Swedish Research Council, Lund University and the Sven-Olof Jansons livsverk Foundation.

Latest news
Link to rss
18 Sep 2020
LU researcher receives Ig Nobel prize for alligator helium study
Stephan Reber has been awarded an Ig Nobel Prize for Acoustics - for a 2015 study that involved an alligator inhaling helium. This was done to understand if crocodilians have…
17 Sep 2020
Metformin for type 2 diabetes patients or not? Researchers now have the answer
Metformin is the first-line drug that can lower blood sugar levels in type 2 diabetes patients. One third of patients do not respond to metformin treatment and 5 per cent…
15 Sep 2020
Rare pattern observed in migrating common swifts
Compared with other migratory birds, the common swift follows a very unusual pattern when it migrates from the breeding areas in Europe to its wintering locations south of the…
15 Sep 2020
Lund University receives donation for Medical Humanities
A donation of SEK 76 million from Birgit Rausing will enable Lund University’s Faculty of Medicine to establish the humanities as an integrated part of medical training and…
7 Sep 2020
Could singing spread Covid-19?
If silence is golden, speech is silver – and singing the worst.
Singing doesn’t need to be silenced, however, but at the moment the wisest thing is to sing with social…
All news
Share
Share on facebook Share on twitter Share on linkedin
Categories
Research
15 Sep 2020