Stephan Reber has been awarded an Ig Nobel Prize for Acoustics - for a 2015 study that involved an alligator inhaling helium. This was done to understand if crocodilians have resonances in their vocalizations, something that certain animals use to communicate body size.

“I am extremely happy and grateful for this prize. As we all know, 2020 has been a year of bad news, so when I heard about this, it actually took some time for it to sink in”, says Stephan Reber.

For his doctoral thesis at the University of Vienna, Reber asked the question whether crocodilians can convey body size with their loud vocalizations, referred to as bellows. It was already known that mammals and birds use the resonances in their vocal tracts to do so.

Being larger is more intimidating to rivals, and also more attractive to potential mates, after all. But why helium?

“When we inhale helium from a party balloon, we start to sound funny because helium is less dense than normal air, and the speed of sound higher. What changes with helium are our resonances, not the vibrations of our vocal cords. Hence, an animal that sounds different definitely has resonances”, explains Stephan Reber.

While recording bellows of alligators in Florida, Reber by chance discovered a Chinese alligator in a quarantine tank, recovering from medical treatment. This was the starting point for solving the rather difficult logistical issue of actually performing the helium experiment, using heliox, an oxygen helium mixture.

The Chinese alligator bellowing in the tank, prior to any helium added

“The results were instantly apparent. The calls of the Chinese alligator sounded clearly different in heliox. It is rare in our field that we know the results of our experiments right away”, says Stephan Reber.

Reber says the next step is to test whether alligators can actually perceive the size cues encoded in the resonances, and also look at other species.

“I would also like to conduct similar experiments with palaeognath birds, such as emus and nandus. These birds are more primitive than the much more abundant songbirds. If both these birds and crocodilians perceive size cues, we have strong reasons to suggest that extinct dinosaurs did the same”, he says. 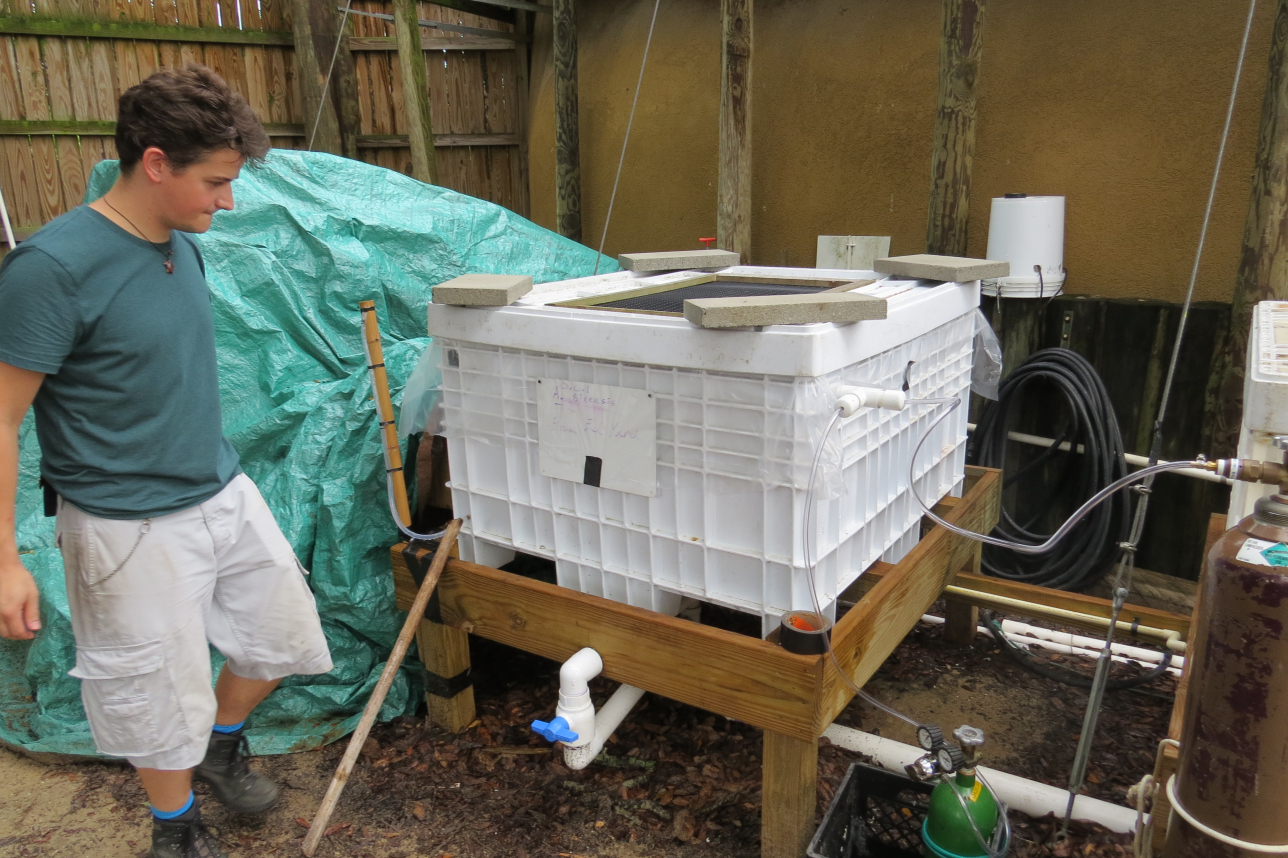 Stephan Reber with the tank, that had to be made airtight (Photo: Judith Janisch)

While the study got a lot of attention for being slightly weird or quirky, Reber says thinking outside the box can only enrich science in the long run:

“Many hypotheses about the evolution of cognition are based on work on a very limited number of species. We came up with some very adventurous ways of working with crocodilians and palaeognaths at Lund University. We really were forced to think outside the box. If a new idea for an experiment is routed in a solid theoretical background and tries to answer a clearly defined question - then the weirder the better”, he concludes.

Publication in Journal of Experimental Biology: A Chinese alligator in heliox: formant frequencies in a crocodilian

Latest news
Link to rss
14 Jan 2021
Prestigious ERC grants for new Covid test and spectrometer
Christelle Prinz, professor of solid state physics, and Edouard Berrocal, researcher in combustion physics, will each receive EUR 150 000 to further develop research results…
12 Jan 2021
Astronomers find explanation for mysterious stars
Researchers from Lund University in Sweden have now drawn an exciting conclusion regarding massive stars that can be observed in the outskirts of many spiral galaxies. These…
26 Dec 2020
Model used to evaluate lockdowns was flawed
In a recent study, researchers from Imperial College London developed a model to assess the effect of different measures used to curb the spread of the coronavirus. However, the…
18 Dec 2020
Three in a row – hat trick for brain electrodes
In order to study how the brain functions and to develop new technologies for treating neurological diseases, researchers at Lund University in Sweden have developed tissue-…
16 Dec 2020
WATCH: 85% of cough droplets blocked by surgical mask, experiment shows
Researchers at Lund University in Sweden have recorded coughs resolved at high temporal resolution - 8,000 images per second - and high detection sensitivity, using laser light…
All news
Share
Share on facebook Share on twitter Share on linkedin
Page manager: lotte [dot] billing [at] er [dot] lu [dot] se | 18 Sep 2020