There are plenty of protein drinks on the shelves of supermarkets these days. However, a vegan, fermented version made from locally grown field peas is definitely unique. That’s exactly what a group of food technology students came up with for an assignment.

“One aim with this drink was to increase the absorption of iron in vegans who can have a tendency towards iron deficiency. The fermentation process removes the substances that otherwise would block the absorption”, says Fay Stensson, one of the students.

“There are currently very few vegan protein drinks”, she adds.

Together with eight other students from seven different countries, she has developed the drink as a part of project course where they were required to come up with a food product.

The best aspect, they all agree, is that the whole pea is used, so there is no waste. This also makes the drink more nutritious.

“A challenge with using the whole pea is that insoluble proteins affect the end product. If we had more time, we would work on solving that issue too”, says Martin Jönsson. 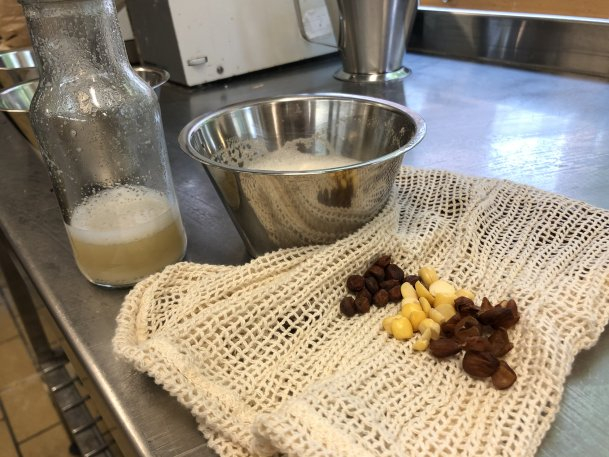 The peas are fermented

Another trendy aspect, in addition to it being a protein drink, is that it is fermented. One example of this is kombucha, a drink originally from China, that nowadays can be found around the world. Fermented drinks have a characteristic, tangy taste.

“We are the only ones to have tried making a fermented protein drink, to our knowledge,” says Martin Jönsson.

However, the good bacteria disappeared when the student heated the end product before packaging, something that needs to be done for consumer safety.

“If we didn’t heat the drink, we would have a probiotic product. This would mean having more control mechanisms in place, something that wasn’t possible within our course,” says Martin Jönsson.

The choice of the field pea, a pea that was a staple from the Stone Age and onwards, but then forgotten in favour of green and yellow peas in the mid-1800s, was because it is both nutritious and has a neutral flavor.

Field peas are also possible to grow in the harsh Scandinavian climate, as opposed to soy beans that are often used as a protein source for vegans. This choice means no rainforest destruction or long-distance transports.

Legumes are known to increase gas production. In this case, the fibres that the gut bacteria otherwise would have used to produce gas are used up in the fermentation process.

Whether or not we will find the pea drink in stores eventually is unclear, according to the students. But they hope to continue exploring the exciting possibilities that fermented products present.

Latest news
15 Jul 2020
What COVID-19 can teach tourism about the climate crisis
The global coronavirus pandemic has hit the tourism industry hard worldwide. Not only that, but it has exposed a lack of resilience to any type of downturn, according to new…
15 Jul 2020
New Promising Treatment Uses Smart Nanoparticles to Target Lung Cancer
A new and promising approach for treatment of lung cancer has been developed by researchers at Lund University. The treatment combines a novel surgical approach with smart…
15 Jul 2020
Novel biomarker technology for cancer diagnostics
A new way of identifying cancer biomarkers has been developed by researchers at Lund University in Sweden. The new technology allows very sensitive, quick and cost-effective…
23 Jun 2020
Next generation 5G being developed at Lund University
Research for the next generation 5G network is in progress. World unique measuring equipment has been constructed at Lund University in cooperation with Ericsson and Sony. The aim…
23 Jun 2020
Starved cancer cells became more sensitive to chemotherapy
By preventing sugar uptake, researchers succeeded in increasing the cancer cells’ sensitivity to chemotherapeutic treatment. The studies, led by researchers at Lund University in…
All news
Share
Share on facebook Share on twitter Share on linkedin
Categories
Education Engineering
30 Jun 2020