Mead made from honey could have healing properties

Did the Vikings have the recipe for good health?

Now, the two researchers have launched a mead drink made from honey and water, containing those same bacteria.

Going forward, the pair will study the possible health benefits of the ancient brew – drunk by the Vikings, among others – including the potential that the drink combats or prevents infections.

Watch a video from Reuters from the launch of the drink, Honey Hunter’s Elixir, and learn more. 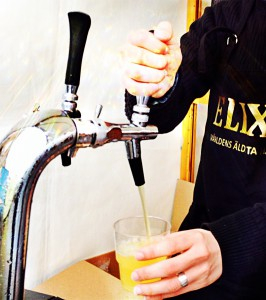 Latest news
13 Aug 2020
Strict diet explains metabolic effect of gastric bypass surgery
In many studies, bariatric surgery has been highlighted as an almost magical method for weight loss and reversing type 2 diabetes. One question that has remained largely…
12 Aug 2020
New rapid and robust COVID-19 antibody test developed
A new COVID-19 antibody test developed by scientists at Lund University in Sweden has shown robust performance upon clinical validation and application. The test detects…
12 Aug 2020
How stars form in the smallest galaxies
The question of how small, dwarf galaxies have sustained the formation of new stars over the course of the Universe has long confounded the world’s astronomers. An international…
29 Jul 2020
Breakthrough method for predicting solar storms
Extensive power outages and satellite blackouts that affect air travel and the internet are some of the potential consequences of massive solar storms. These storms are believed…
28 Jul 2020
New blood test shows great promise in the diagnosis of Alzheimer’s disease
A new blood test demonstrated remarkable promise in discriminating between persons with and without Alzheimer’s disease and in persons at known genetic risk may be able to detect…
All news
Share
Share on facebook Share on twitter Share on linkedin
Categories
Research
Page manager: lotte [dot] billing [at] er [dot] lu [dot] se | 15 Jun 2020